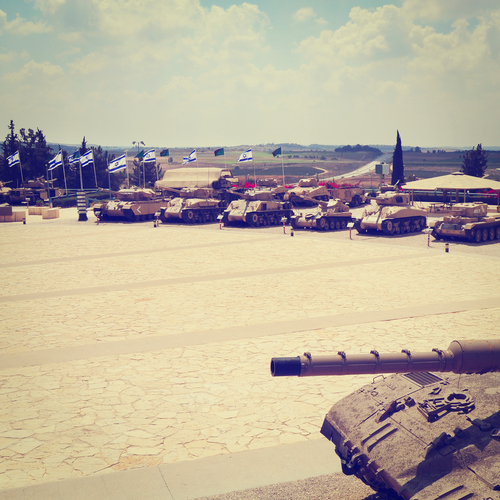 The Yad Lashiryon Memorial at Latrun is the Armored Corps’ Memorial Site. Here, the Armored Corps remembers its fallen comrades, every hour of every day, all four thousand nine hundred and sixty-five together and each individual - their personalities as individuals and as fighters, how they lived and how they died. The Armored Corps honors each of the fallen both on a personal basis and as part of a whole.

Visitors to Yad LaShiryon meet the figures of the fallen: their names, their faces, their smiles, their ranks, their units, their acts, their achievements, the sum of their lives and their stories as individuals. In the background, visitors coming to pay their respects to the fallen of the Armored Corps meet their military and professional world, the world of the armored brigades and their soldiers in the IDF. Here they will find a display of the Armored Corps battle heritage, from the earliest days of the state and up to present times, the decisive role of armored forces soldiers in every victory and the special qualities of the men in the tanks. The site is imbued with the spirit of the Armored Corps, its commanders and soldiers.

This spirit was not created in a single day. Many people took part in creating it, each in his generation, and each in his own way, in building up the force, in the battles and in routine security. Part of the spirit of the Armored Corps has been carved from the special qualities of its commanders and soldiers, men of merit, outstanding figures, throughout the years of the state’s existence and in every period of the corps. However, another part of the Armored Corps spirit has been shaped from the special tradition of the Jewish soldier throughout the generations.

The site at Latrun is at a focal point of Jewish combat from time immemorial. In the Ayalon Valley Joshua Bin-Nun met his enemies, at nearby Emmaus Judah the Maccabi confronted his foes, here we battled for the road to Jerusalem in the War of Independence, and here we fought once and for all in the Six Day War.

What is Yad Lashiryon Site in Latrun?

Yad Lashiryon is located in Latrun, near highway No.1between Jerusalem and Tel Aviv-Jaffa. The site’s uniqueness is rooted in its place in history:

It was the site of the Biblical battles of Joshua Bin-Nun against the Amorite kings; in the book of Joshua it says: ‘Sun, stand still upon Giv’on; and moon, in the valley of Ayalon’ (Joshua 10:12).

This area was also a battlefield in the time of the Maccabis, the site of Judah the Maccabi’s battle against the army of Antiochus and his commander Gorgias, in which he defeated them and drove them to the sea. In the book of Proverbs it says: ‘For with wise advice shalt thou make war’ (Proverbs 24:6)

The area was recaptured from the Jordanian army during the Six Day War.

Yad LaShiryon serves as an active commemoration of all the fallen members of the Armored Forces in all of Israel’s wars. Here the traditions of the Armored Corps and the tales of heroism of its fighters and units are preserved and recalled for the younger generation and for all visitors to the site. Yad LaShiryon serves as a warm home, a preparatory school for young, graduate and adult soldiers of the armored forces.

What does the site include?