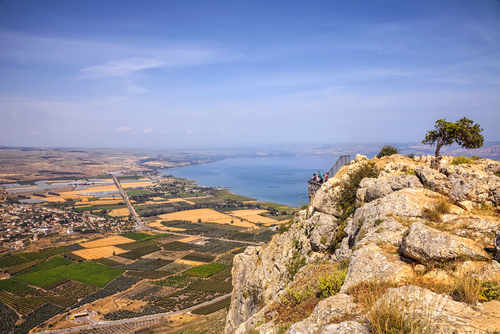 The 17 springs of the city of Hamat Tiberias have been famous since antiquity for their healing qualities. Because they brought relief for various maladies, including boils, Jewish sages permitted people to bath in them even on the Sabbath.

The site was discovered accidentally in 1920 during construction of the Tiberias Zemach road by the Jewish pioneers Labor Battalion. A year later, a seven-branched candelabrum was also found.

The Hamat Tiberias synagogue as seen today was built between 286 and 337 CE, when the Sanhedrin was headquartered in Tiberias. It is called the Severus Synagogue after a name that appears in a Greek inscription in its mosaic floor.

The mosaic floor the earliest synagogue mosaic in the country is the highlight of the synagogue. It consists of three panels. The central one depicts a spectacular zodiac, surrounding Helios the sun god, driving his chariot across the sky. The images of four women symbolizing the seasons appear in each corner of this panel.

The Hammam Suleiman Museum is located at the entrance to the site.

How to get there:
The park is at the southern entrance to Tiberias across from the Tiberias Hot Springs