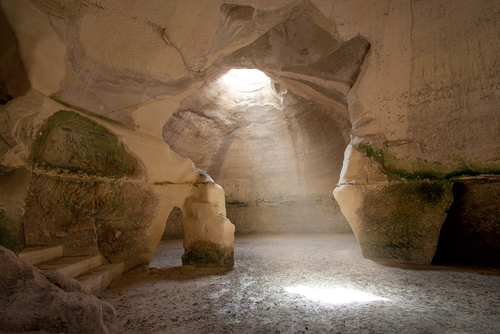 Bet Guvrin-Maresha National Park encompasses approximately 5,000 dunams (1,250 acres) of rolling hills in the Judean Lowlands. The hills, approximately 400 m above sea level, consist mainly of chalk overlaid with harder rock called nari. For thousands of years people have been cutting into the rock beneath the nari as quarries, burial caves, storerooms, industrial facilities, hideouts and dovecotes. They dug small openings into the nari, normally no more than two meters thick, and expanded the caves into the softer chalk beneath. Hundreds of such caves were dug at Bet Guvrin and its surroundings, creating subterranean networks of unparalleled complexity.

At a high point in the park is Tel Maresha, the highest city in the Judean Lowlands. It was fortified by King Rehoboam of Judah following the campaign to the region of the Egyptian Pharaoh Shishak: “And Rehoboam...built cities for defense in Judah...Gath, and Mareshah, and Ziph” (2 Chron. 11:5-8).

The city reached its height during the Hellenistic period (third-second centuries BCE). The Hasmonean king, John Hyrcanus conquered the city in the second century BCE and forcibly converted its inhabitants. During the Roman period the inhabitants of Maresha abandoned it, building the city of Bet Guvrin nearby and transforming the latter into the capital of the region of western Idumea.

Bet Guvrin was an important city in the Crusader era as well. Eventually, the Arab village of Beit Jubrin was established among its ruins. It was abandoned during Israel’s War of Independence in 1948.

Visitors can follow the marked trail through the park using the map provided at the entrance, or drive from spot to spot.

How to get there:

The park is located off the Bet Shemesh-Kiryat Gat road (no. 35) opposite Kibbutz Bet Guvrin.

Main sites in the national park (numbers refer to map):

3 Columbarium Caves: Caves used for the raising of doves.

5 Agricultural area: an olive-oil press and grape-vat that can be operated by visitors.

6 Complex cistern systems: Huge cisterns that served the inhabitants of Maresha during the Hellenistic period.

7 Maze Cave (Complex 61): A system of about 30 interconnected caves, which visitors can traverse underground to understand how people made use of such spaces in antiquity, sensing the natural climate control. The exit turns out to be only a few meters away from the entrance.

8 Sidonian Burial Caves: A series of impressive burial caves from the Hellenistic period (third-second centuries BCE), located at the foot of Tel Maresha and featuring reconstructed wall paintings. The paintings, proof of the presence of other cultures at Maresha, depict hunting scenes with wild and mythological creatures and shed light on ancient artistic techniques and crafts.

14 The Bell Caves: A series of 80 large caves, which the ancient inhabitants connected by passageways. The caves, the largest of which are over 5 meters high, were dug into the hard surface rock and quarried downward in the shape of a bell. Arabic inscriptions and crosses found on the walls show that many of the caves were dug during the Early Arab period, in the seventh-tenth centuries CE.

The Roman Amphitheater: This amphitheater was originally intended for gladiator fights to entertain the masses. Visitors can see the arena (a Latin word meaning sand), the ruler’s seat and the place where the wild animals emerged.

Land of a thousand caves